Adopting Lean as an Owner 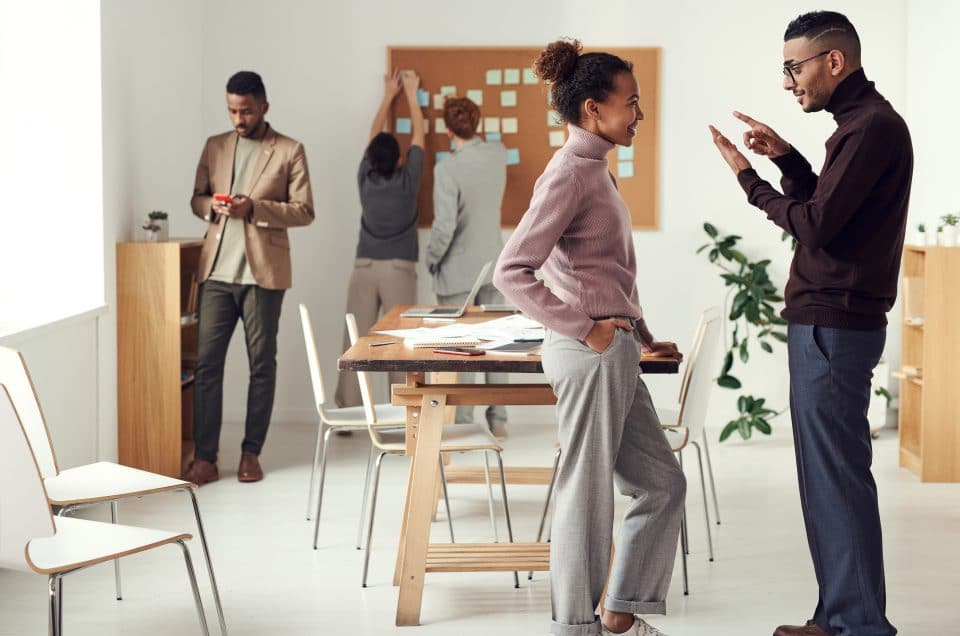 Attendees at a recent Lean Workshop held at the headquarters of Warehaus, in York, PA had mixed levels of Lean experience from zero to advanced. But clearly the beginners outweighed the advanced.[1] It illustrates the point that Lean in the design and construction industry, though not a new concept, is slow-growing by its nature. Lean is hard work that makes everything easier. While a hard habit to form, the effort is well worth it.

I had the opportunity to speak at the Warehaus Lean Workshop, representing Penn State, but count me in as one of the beginners. I was introduced to Lean in 2015 when I joined Penn State. I admit, I never heard of it before then. I was more informed about Lean in 2016 at the Lean Construction Institute’s 18th Annual Congress. I went back to the 19th Congress in 2017 and plan to return for the 21st Congress in 2019. But, I still do not fully exploit Lean on my projects. Why not? Like a language, unless everyone is speaking the same one, communication will suffer. Project teams carry a mixture of Lean experience much like the workshop audience and implementation is a new hard-to-form habit. 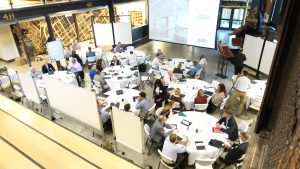 One of the ways Penn State Office of Physical Plant (OPP) is making serious progress with Lean is by including it in our contracts. However, large scale buy-in is required to create a true Lean culture. That is what the Warehaus Lean Workshop was all about. It is what the LCI Congress is all about. It’s about spreading the message and getting more and more people to understand Lean when it’s used. There’s no doubt, Lean has ascended on Penn State design and construction projects because fundamentally Lean is about forming great relationships and respect for people and that is the culture we want within Penn State’s OPP Design & Construction Division. 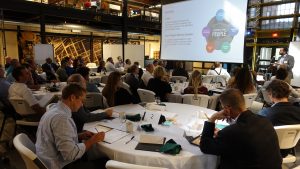 The Challenge of Implementation

Karen Martin was one of the Keynote speakers at the 2017 LCI Congress. She was promoting her new book called Clarity First.[2] She said boldly, “Being unclear robs us. It’s everywhere.” Lean, when mis-understood can quickly get unclear, confounding and more complex than it should. Karen also said, “Lean is the greatest advantage to date. Its implementation is the greatest challenge.” So true.

I think the challenge of its implementation is from the attempts to make a direct translation of Lean as an ideology most notably from the Toyota manufacturing plant in Japan to the design and construction industry. Any beginner who is introduced to Lean by “A3 thinking”, “pull planning”, and “choosing by advantages” is attempting to make a huge leap and could easily become puzzled. That direct approach is deficient because it bypasses learning Lean in its essence first. Lean from the outset is personal and it should reach the mind (and heart) first before jumping to the methodologies.

The “a-ha moment” for me came from listening to the audio book called 2 Second Lean by Paul Akers read very enthusiastically by the author[3]. The book should be a litmus test to see if Lean is for you – if you get it or if you don’t. I think it is a prerequisite for anyone’s Lean journey. If the chapter called “Do It in the Bathroom” doesn’t bother you (after understanding its meaning) then you’re on your way. This book for me was infectious and establishes the framework for how to implement Lean in all aspects of life. In fact, other subsequent books by Paul Akers are titled Lean Health, Lean Travel, and his latest called Lean Life.

If you are serious about Lean, the book 2-Second Lean should inspire you to start the journey by the astounding results Lean produced for Paul personally and professionally with his company called Fastcap. The book is Lean in a nutshell, which is all about eliminating waste and continuous improvement. What underlies those two things is respect for people. From there you should see that Lean is personal and those things can be applied to everything – steadily over time. No one person, group, or business suddenly becomes Lean overnight by simply choosing to adopt it.

To further make the point, the Japanese word for the culture of continuous improvement is Kaizen. I’ve learned at an LCI Congress that the Japanese symbols for Kai (change) and Zen (good) are written with symbols representing “self”, “whip”, “sheep”, and “altar”. The translation meaning “self-sacrifice” so you can make a change for the better… for everybody.

It becomes clearer to see by learning from its Japanese source that Lean defines waste as disrespectful, and continuous improvement is about making change for the better, for all. But it starts within each person and requires each person to participate. It is not something to be delegated downstream from top level management or transferred to a consultant. It doesn’t work that way, so its implementation is indeed a challenge as well as a journey.

Those of us in the design and construction business have most likely experienced, if we have not been told or read, that the industry is “broken.”[4] Applying “Lean”, (i.e. the ideological culture of eliminating waste, continuous improvement, respect for people) to the industry’s problems created “Lean Design and Construction.” Penn State OPP (not to imply the entire University) has adopted Lean Design and Construction thus creating “PSU OPP Lean Design & Construction.” Without properly connecting the dots Lean implementation can appear to be just a mish-mash.

PSU OPP Lean Design & Construction is adopted precisely from The Lean Construction Institute (LCI). The LCI was formed in 1997 and will host the 21st Annual LCI Congress in October 2019. Since it has been around twenty-one years it’s really not new, but it started very small and grew steadily but slowly. For many – especially architects (of which I am one) it is a very new and eyebrow-raising concept. I was the only architect in the Introduction to Lean seminar at the 18th Annual LCI Congress in 2016. However, many Construction Managers and Contractors have embraced it and are out ahead of Owners and Architects.

Leaders in Lean Construction Management I have spoken to say the number one factor of a successful project is without a doubt when the Owner (like Penn State) is fully on-board and committed to Lean. This points back to the analogy of speaking the same language. John Bechtel, the Assistant Director of Design & Construction at Penn State OPP is having much success in this arena, communicating very publicly, at COAA events and elsewhere, that PSU wants Lean and our teaming partners need to bring it. Like it or not, consultants who want to do future business with Penn State will have to be Lean.

The bible of Lean for Penn State OPP is the book called Transforming Design and Construction – A Framework for Change and also Target Value Delivery: Practitioner Guidebook to Implementation – both available from the LCI.

The mission of Penn State’s Office of Physical Plant is to provide excellent facilities services to Penn State. Unlike many business owners, design and construction is what we do daily. It is our purpose. We invest hundreds of millions of dollars annually toward construction. In an industry that is broken, we have too often become the referee on projects. Contract arrangements that make it easy to point the finger at others is waste. Lean will help us to become like a conductor, instead of a referee, and therefore add value to the project delivery process.

Lean has been defined as a “culture of respect and continuous improvement aimed at creating more value for the customer while identifying and eliminating waste.” The customer here is everybody. Everyone on the team is a customer to somebody else on the team – co-worker, vendor, supplier, designer, builder, owner – the whole vast array of people required are included. As the saying goes, processes don’t design and build buildings, people do.

Penn State’s Office of Physical Plant adopts the definition of a Lean Project Delivery System as, “an organized implementation of Lean Principles and Tools combined to allow a team to operate in unison to create flow.” How have we begun to do that? Selected straight from the book Transforming Design and Construction – A Framework for Change we include the following “big 10” in our Requests for Proposals and contracts:

9. The Mindset of an Effective Big Room

Please refer to the book for more insight on each of these principles and tools. Also remember, it’s about continuous improvement so how they are carried out is always a work in progress. These Lean principles and tools are used in a manner not to guarantee success, but to give a higher probability of:

PSU projects delivered with CM At-Risk/ GMP using Lean have achieved all of the above. We have done one Integrated Project Delivery (IPD) project as of this writing and many Design-Build projects with varying Lean success. Lean can be scaled and incorporated into any delivery method fitting to the project given the proper team dynamics. We endeavor to implement as much as possible even under Design-Bid-Build projects funded by the PA Department of General Services. Lean works because respect and continuous improvement aimed at creating more value for the customer while identifying and eliminating waste is a culture and not a contract clause.

In closing, two quotes from Paul Akers are worth noting. One for the skeptical: “If you think you have your life or your business pretty well dialed-in, you’re clueless. Toyota™ still makes millions of improvements worldwide to their processes and they have been thinking Lean for over 50 years.” And one for encouragement: “Can you imagine every day everything getting a little bit better? Not dramatically, but consistently getting better? When you become a Lean thinker this is what happens and it is a massively fulfilling way to live!”

[2] Download the first chapter of Clarity First for free at tkmg.com/books/

[3] A PDF download of the book as well as the audio book are available for free at paulakers.net

Brian Hayes is a Facilities Project Manager in the Design and Construction Division at Penn State’s Office of Physical Plant (OPP) and is responsible for leading major capital projects from conception to completion. Brian believes the Lean principals of respecting people, eliminating waste, and continuous improvement applies everywhere – personally and professionally – where people work intentionally to make life flow smoothly and efficiently and create environments that allow everyone to be their best.